As a non-governmental organisation with activities for public benefit and in our capacity as representatives of the civil society in Bulgaria, Civil Movement „Bulgaria United with One Purpose“ (BOEC) presents to your attention information on serious human rights violations, expressed in illegal wiretapping, surveillance and recording of Georgi Borisov Georgiev – Chairperson of the BOEC Association, as well as of dozens of other civil activists and politicians.

From the attached documents it becomes clear that during the wiretapping of Georgi Georgiev, many Bulgarian and foreign journalists were also wiretapped because of their contacts with him (telephone interviews).

The request for wiretapping of Georgiev was made by the Specialist Prosecutor’s Office, which until 2019 was headed by the current Chief Prosecutor Ivan Geshev.

The permission for wiretapping was given by the Specialized Criminal Court. Both institutions have been turned by the political mafia into bats against inconvenient citizens. The specific request for wiretapping and surveillance was made in 2020, during the protests having as major demands the resignation of Boyko Borisov’s government and the resignation of Ivan Geshev – Chief Prosecutor. During this period, BOEC was the main organiser of the protests and it submitted a number of reports to the Bulgarian and European institutions for corruption, siphoning-off of national and European funds and abuse of power by Boyko Borisov, Ivan Geshev, Delyan Peevski, Sotir Tsatsarov and other politicians, ministers and magistrates.

The documents show that the „crimes“ committed by Georgiev are:

„Active participant in the protests. Together with the association, BOEC, planned individual protests and events. He actively uses mobile and Internet applications.“

The right to free expression, the right to associate, as well as the right to protest are rights guaranteed by the Constitution of the Republic of Bulgaria. In this case, these rights have been turned into crimes and, just because Georgiev is asserting his rights, he has been subjected to repression, persecution, surveillance and wiretapping. The documents were validated and confirmed by the Minister of Interior, as well as by a publicly announced list of wiretapping requests. From them it becomes clear that there have been wiretapped many conversations of Georgi Georgiev with journalists, both Bulgarian and foreign – Lyuba Kulezich and Miroslav Mitkov from „Eurocom“ and „Fakti“, Dimitar Stoyanov – „Bivol“ and BIRD.BG, Nikolay Doychinov and Vesela Sergeva from Agence France-Presse, etc. They have been turned into direct victims of wiretapping and their rights were violated only because of their professionalism and the conversations with Georgiev on the occasion of interviews covering the protests and the activities of BOEC… 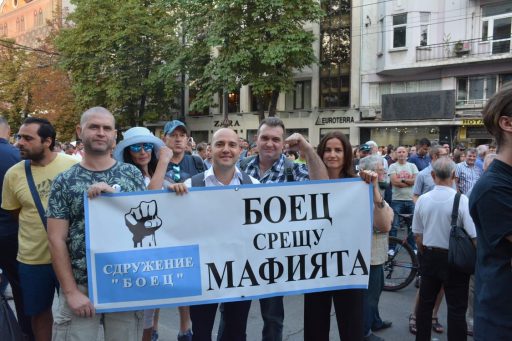